Soon I felt nothing from the waist down.
I lay there looking around for my husband.
They told him 10 minutes, but 10 minutes had come and gone, and I couldn't find him.

My mind was racing as I looked around. A deep panic set in. I saw the neonatologist to the right of me, and the anesthesiologist to the left of me.
I got scared. What if he wasn't breathing when he came out. We would have done this all for nothing. We had already told the doctor any interventions that could be done on my chest were the only ones we wanted.

I started panicking and needed to tell the neonatologist that I changed my mind.
I got her attention, but before I could even speak, I was instantly crying and struggling to get my words out.

I told her if Samuel was struggling, I wanted them to take him to the resuscitation room and do whatever they could to stabalize him. I made this decision without Lee. I felt guilt, but needed to know we could meet Samuel.
Not long after ,they shuffled Lee into the room. Squeezed him into a spot next to my head.
I cried some more.
Before I even realized they were operating on me, the doctor says "He's almost here".
They started to cut the sheet down so I could see him coming.

Lee could see everything.
I heard lee choking up saying "There he is. He's so small"
Lee and I knew cutting his umbilical cord meant cutting his life line.
Our lives were about to change forever. 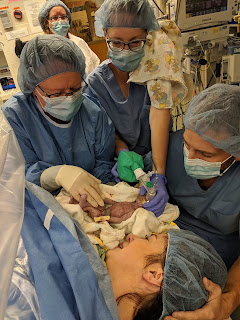 They placed our Sweet Samuel next to my head.
The happiest and scariest moments of my life.
He was here. But he was struggling.
The NICU team raced over.
I cried and I begged them to help him breathe.

Lee and the NICU team took Samuel to the resuscitation room.
I could see them all through the window.
Everyone surrounding my baby, yet I had no idea what was happening.
What was taking so long.
Lee kept looking back at me.
I feared he would be coming to deliver me bad news.

Instead, he finally came out holding our sweet boy.
They gave Samuel oxygen through is nose, and he was stabilized.
They placed him on my chest. I was calm.
He was small.
Samuel was 1lb 7.9oz and 12.5inches long.
He had a head full of hair.
His hands were clenched.
His ears were low.
But boy was he beautiful.

After spending some time in the operating room, we were taken back to recovery.
I was able to sit up and do skin to skin with our son.
his oxygen levels went from the low 60s into the high 80s when we put him on my chest.
It was the best feeling ever. Like he knew his momma.
We even heard a few little "squaks" from him.
I wanted him to stay there forever. 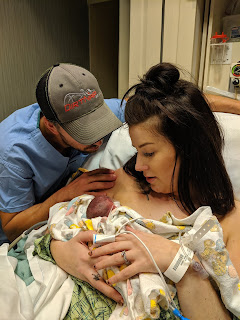 There were many emotions in that time.
We went back and forth from happy, to crying, back to smiling.
We felt so robbed, yet so blessed that he was there with us.
I gazed over at Lee and made sure he knew I could have never done any of this without him.
I am so grateful for the husband I was blessed with.

I looked at Samuel's monitor, and saw his levels slowing dropping.
About the same time, the pastor had come back to do a baptism.
It was very important to us that Samuel was baptized in his brief life.
They found him a little gown, and baptized him.
Even our nurse asked if she could stay for it. We were all praying for our little guy.
I don't know if I have ever felt my Savior's love,and my Heavenly Father so close to me as we did in those moments.

It was right after his baptism that his numbers started dropping steadily.
His oxygen tube was coming loose because of all the moisture. It needed more tape.
I held it in place while they called someone to fix it.
But when I looked back at the monitor, I could see it wasn't helping.
I looked at Lee with such grief in my eyes. His eyes shared the same pain.
The monitor kept beeping because it was all dropping so fast.
We knew it was time.
And it was a gut wrenching feeling. the inevitable was happening.

By time they got back with the tape, I asked them to remove the oxygen.
We wanted to remember our baby without tubes and wires.

We had three amazing hours (that felt like minutes) with our sweet boy.

He was so strong.
The loss of Samuel affected everyone in that room that night.
Our nurse was trying to be strong for us and do her job, but her her eyes were red and wet.

The next hours were filled with so much anger and grief.

Life was not fair.
As his mother, the guilt was strong.
I felt like I failed him.
My body failed.
I tried to protect him, I tried so damn hard .
I would have done anything for it to be me instead of him.
Our family was supposed to be complete, and now there's a giant hole in our hearts.

The next days were just as hard.
Every nurse, doctor, social worker saying "I'm sorry we have to meet on these circumstances"
The staff was all amazing though, we are thankful for that.
We were able to keep Samuel with us as long as we wanted.
And we did.
But the time came for us to leave him.
The funeral home was coming to pick up our son.
And it was just the start of hard goodbyes.
We held him, and we cried.We cried hard.
We placed him in his basket, and we called the nurse.
Walking out of that room was a new level of pain.

The rooms surrounding us filled with joy of new life.
While we were left with sorrow.
Moms holding onto their new babies, while I clang to Samuel's baby blanket and a teddy bear.
That's all we had of him when we left the hospital.
It was the longest, saddest walk of my life leaving there that day.
Driving away from the hospital was just as hard.
I couldn't even process what was happening.

We had to stop at the drugstore to fill my prescription.
It seemed it would have killed the workers to share a smile.
I did want to shake them and ask if they knew what we had just gone through.
But they didn't know. And they didn't care.
Even though our life has changed, and our world has stopped turning, every one's life is still going on.

So many things had changed in those 48 hours.
Our new vehicle won’t be any fuller.
I will have to cancel the newborn session we had scheduled.
Porter never got to meet her baby brother.
We won’t have a new baby at the Holidays.
We will put away the things we have bought.
We won’t be putting up a crib.
We’ll be finishing an office instead of a nursery.
I am no longer pregnant.
I lost a pregnancy.
And we lost a baby.
the picture of “what should have been” is completely destroyed.


We are completely destroyed.

We will be burying our sweet boy this weekend.

So many people I know have lost babies, struggled to get pregnant, or didn’t have the number of children they hoped for for some reason or another. To those women, I understand your pain, your struggles and your difficulty. Each story is different. I hope and pray we all find that peace that we need.


And I promise, one day I will choose joy. I
Samuel was never a home town hero , and most people didn't meet him, but I  will make sure the world knows Samuel's name.
We will tell everyone of Trisomy 18- we want everyone to know about it and we want everyone to remember Samuel.
We were once part of the 1 in 6000 statistic of Trisomy 18. The odds of us ever personally knowing someone who will have to go through this, is so very slim.
95% of these babies end in stillbirth or miscarriage.
But we beat the odds, and brought our baby into the world alive, even if it was for a brief time.
We are thankful God brought Samuel into our lives.
I now have a scar to remind me daily of him.
There's not a thing we wouldn't have endured for Samuel.
He has forever changed our life. 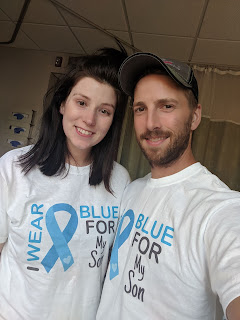 Popular posts from this blog

- September 12, 2019
We have been overwhelmed by the love and support, the care, the cards and gifts, and the thoughts and prayers that have been said on our behalf. Your kindness has forever changed us and it's not something we will ever forget.
Last week was an off week.  I couldn't stayed focused at work.  In fact, I was coming in from work for 2-3 hours at a time and hiding in my bed. Lee and I both had a breakdown in our bed earlier in the week. We just held each other and cried. We were so scared of the unknown. I was celebrating another week of pregnancy, yet I felt so robbed. We wondered if Samuel would know our love if we never got to meet him. But we were determine to carry and meet this sweet boy. I had posted an update for everyone on facebook early in the week, and I planned on stopping until we got some significant news.
I didn't realize my next post would be so soon. But God knew.

Thursday, September 5th was another full day of doctor appointments. We were due for an ultrasound t…
Read more

"Not Compatible with life "Part 2

- August 16, 2019
It had been over a week since we got the news of our genetic screening coming back positive for Trisomy 18. Although we had questions, we had no answers. And although a we went through a number of emotions, we still remained hopeful. Yesterday (August 15), We had our full day of scheduled appointments. I was oddly, very calm going into everything. I think I was just so ready to have answers. Our first appointment was meeting with the genetic counselor. His job was to explain our first test results, and answer any questions that we may have. He did a really good job of being informative. And he was hopeful this was just a fluke. The blood test wasn't THAT accurate and we had already made it this far into pregnancy. He would better prepare us for what was to come if the findings were confirmed.
We then went into an hour long ultrasound. Lee sat at top of the bed, and held my hand.  My eyes filled with tears seeing my baby again, he was strong, and moving around in there. He was perfect.
B…
Read more